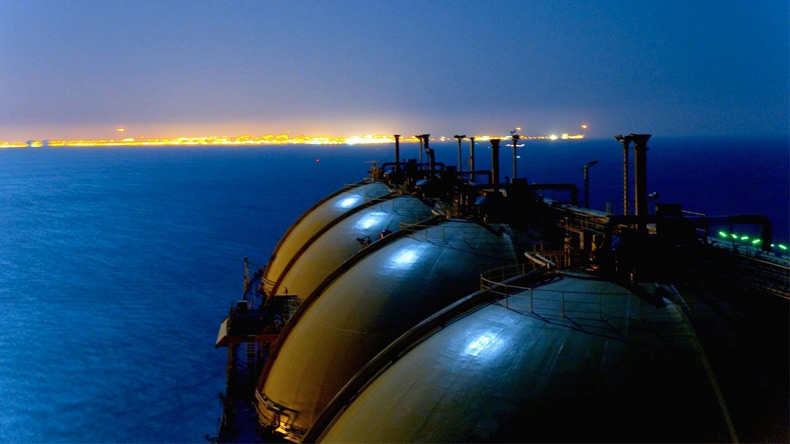 Baltic Dry Index to be revamped

Is China a boon or curse for Hong Kong's maritime arbitration aspirations?

Ready for the next cyber-attack?

Trafigura to build another LNG terminal at Port Qasim

Crude Outlook 18: Hope of bottoming out

DEMAND for shipping liquefied natural gas is set to continue its rapid growth path, leading to much higher spot earnings for shipowners in the coming year.

Driving that is an increase in average shipping distances as more LNG is exported from the US to markets in Asia, while the ramp up of export projects around the world will lead to a vessel supply tightness as demand outpaces fleet growth.

China, the world's largest energy consumer that is seeking to use more clean fuel, could overtake South Korea as the world's second-largest LNG importer as early as next year, according to the US Energy Information Administration. By 2040, China may well be on the road to importing 11bn cu ft per day, on par with Japan, currently the largest importer, the EIA said.

This year LNG trade has grown 12% while the fleet has only expanded 7.5%. And that promising balance looks set to continue - DNB has projected volume growth of 38% to 365m tonnes compared with fleet expansion of 27% between 2016 and 2019.

Sharing similar sentiments over such a sweet mix, Jefferies finds the near-term and longer-term outlook for LNG carriers quite attractive.

Four new projects are expected to start operations by the end of 2017, with a total annual production capacity of 20.9m tonnes at full throttle. That would require an extra 23 LNG carriers, according to Stifel estimates.

The Chevron-led Wheatstone project in Australia shipped its first cargo in October ahead of a pick-up in winter demand.

Other projects that are close to starting include Cheniere's Sabine Pass train 4 and Dominion Energy's Cove Point train 1 in the US, Gazprom's Yamal train 1 in the Russian Arctic, and Golar LNG's floating liquefaction vessel Hilli Episeyo off Cameroon.

Already, spot charter rates for 160,000 cu m vessels have moved up to $60,000 per day as of early November, double the figure at the start of the year. Rates could head higher as even more output hits the market, according to Clarksons.

Looking further ahead, the US is expected to be a major supporting factor in terms of both export volume and shipping distance.

Elsewhere, DNB forecasts a 48% rise in tonne-miles in the period from 2016 to 2019, in part owing to a 7% increase in average sailing distances amid rising US exports. Last year, the shipping distance between Australia and the Far East was on average 3,626 nautical miles, while US exports travelled 6,731 miles, it said.

On the demand side, China remains the growth driver, said Clarksons, with imports up 22% this year to October after growing by 34% in 2016.
Other notable demand centres include Pakistan, Bangladesh, the Philippines, Thailand and Myanmar, Drewry analysis showed, with combined requirements of 32m tonnes in 2020, creating employment for some 25 to 30 LNG vessels.

At a shipping event in London in September, owners and operators expected the market to be short of 30 to 40 vessels overall by the end of the decade.
Financing and technology may dampen the long-term growth prospects, while near-term fleet expansion remains large.

The orderbook stood at 98 conventional LNG carriers as of early November, according to Clarksons data, which was 24% of the existing fleet. But that ratio is declining because few new orders have been placed since the end of 2015.
While the market is in need of additional LNG carriers, significant investments are naturally required but financing is hard to come by.

MARENAVE chief executive Ole Daus-Petersen has been removed from the top job at Marenave, in what is looking like a knock-out blow for Jens Mahnke in his struggle to beat Claus-Peter Offen for control of the liquidated-but-listed KG house.

As chief executive, Mr Daus-Petersen was thought to favour Mr Offen's plans for the future of Marenave, a previously substantial operator which has no vessels to its name after HSH Nordbank forced the sale of its 13-strong fleet earlier this year.

In a statement on its website, the company said Mr Ole Daus-Petersen's appointment as sole member of the Management Board had been "terminated." It named Bernd Raddatz for the role.

TWO leading German shipowners have denied reports that they have reached debt standstill agreements with taxpayer-owned HSH Nordbank, which is set for privatisation by the end of February.

According to a German business magazine, Claus-Peter Offen's Offen Group and Jochen and Christoph Dîhle's Dîhle Group both managed to negotiate reduced repayments of interest and principle with HSH over the summer.

"Fact; the Offen Group has no standstill agreements with HSH Nordbank or any other bank," Offen said in a brief statement. HSH did not respond to a request for comment.

THE UK maritime lobbying sector is seeking a bigger piece of the spending pie for the industry when Chancellor Philip Hammond stands up to deliver his budget on Wednesday.

Associations representing owners, ports and maritime service providers, including Maritime UK and the UK Chamber of Shipping, are urging the government to increase spending on seafarer training and on infrastructure that would mitigate any disruption caused by Brexit.

"With a number of maritime service companies weighing up their future in the UK post-Brexit, it is vital that further negative conditions - such as a reduced supply of skilled and experienced labour - do not add detrimentally to those considerations," said Maritime UK chairman David Dingle.

Baltic Dry Index to be revamped

THE Baltic Dry Index, seen as the most credible indicator of the future health of the entire dry bulk shipping market, is to undergo a makeover in the new year.

The Baltic Exchange plans to completely remove the handysize time charter average from the BDI and increase the weighting for the rest of the segments from January 2.

The Baltic Exchange has been undertaking a review of all its dry indices and assessments in terms of route description, individual weightings and the balance between the Atlantic and Pacific basins to make sure its benchmarks accurately reflect shifts in the global fleet and cargo movements.

Is China a boon or curse for Hong Kong's maritime arbitration aspirations?

NO ONE should underestimate Hong Kong's ambition to reclaim its title as the arbitration centre of Asia. With Beijing's Belt and Road Initiative spanning 60 countries and jurisdictions, investors will need reliable arbitration venues, such as Hong Kong, to resolve disputes and bolster their confidence in doing business abroad.

But Beijing has sovereignty over Hong Kong and the authority to interpret the city's mini-constitution, the Basic Law. The central government has increasingly made that evident to locals as well as the rest of the world over the past few years. "It's an issue, yes," concedes Arthur Bowring, convenor of the Hong Kong Maritime Arbitration Group and former managing director of the Hong Kong Shipowners Association.

Ready for the next cyber-attack?

MAERSK's  experience as a victim of the NotPetya ransomware attack in June should be a wake-up call for shipping. With the Institute of Risk Management describing cyber security - or a lack of it - as the number one risk to container shipping companies, a leading law firm is warning that the threat of an attack is no longer an emerging risk, but one that is here already.

"Every single company, whether a line, a logistics operator, a freight forwarder or a terminal operator needs to understand this," says Holman Fenwick Willan partner Toby Stephens. "There is a greater understanding of it and if you are not prepared for it, you are going to be held to account for it. That is the scary part."

Trafigura to build another LNG terminal at Port Qasim

COMMODITIES trader Trafigura Group plans to build a second liquefied natural gas import terminal in Pakistan to handle a supply shortfall in that country amid falling volumes of locally-produced gas.

COSCO Shipping Energy Transportation has firmed up orders with Dalian Shipbuilding Industry Co for four very large crude carriers and three suezmax tankers. The price per ship was not disclosed.

NATURAL disasters such as hurricanes and tropical storms in 2017 have forced reinsurers to book major losses and thus raise costs in the insurance component of vessel operating expenses despite owners' best efforts to curb costs, according to Drewry.

THE International Chamber of Shipping has criticised government subsidies and other support measures to shipyards as being detrimental to 'green growth'.

ISRAEL-based container shipping line Zim has completed a pilot of electronic bills that will "advance our industry as a whole towards a more efficient and modern phase," according to the company's chief information officer Eyal Ben-Amram.

STAR BULK's new unit in Geneva has been set up to get closer to the grains chartering community and to get more involved in hedging activities.

OSLO-listed Flex LNG has secured a $315m term loan facility to finance three of its six newbuildings with flexible terms, positioning itself for market recovery despite mixed results from its recent trials in charter markets.