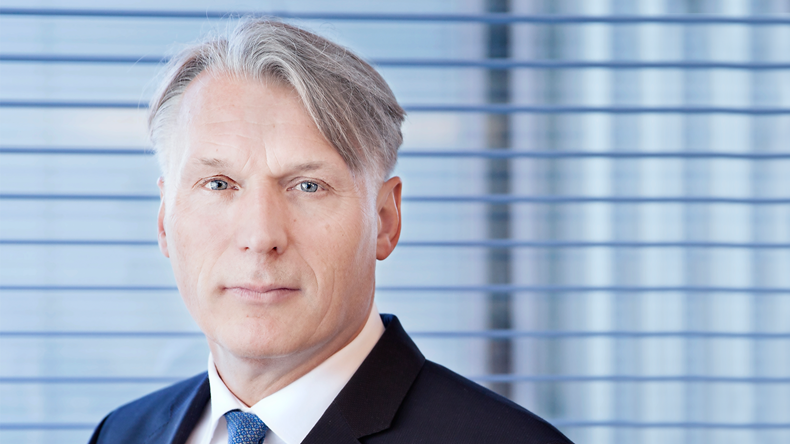 US targets shipping in tightened sanctions against North Korea

What do you think? We would love to hear your thoughts and comments on our new Daily Briefing

Hîegh LNG's Sveinung Stõhle has clearly reaped the rewards of making a bold bet on FSRUs, being willing to place speculative orders for $250m-$300m vessels when few had the stomach to do so a few years ago.

At the same time, rapid FSRU deployment in South Asia is encouraging. And China's willingness to phase out the combustion engine for electric cars clearly points to oil demand being substituted by gas demand in the long run. FSRUs are important links in the gas supply chain and could even help LNG bunkering develop amid the International Maritime Organization's push for cleaner marine fuels.

But the FSRU market itself is at crossroads. LNG carrier owners from MOL to Teekay to BW will soon be saddled with several old LNG ships that are prime candidates for conversion to floaters. They are set to become new players in the FSRU space. Mr Stõhle will need to brace for more competition as the market gets crowded.

Several years ago, when offshore became lucrative, many shipowners pumped money into the sector before overbuilding and the oil price slump hit with a vengeance. The FSRU market still has some distance to run before it nears saturation. Still, owners must be wary that the FSRU segment does not suffer the same fate as their offshore gamble did.

Now poor countries, where the bulk of FSRU projects have been deployed, are waking up to the fact that floaters are a quick and easy solution in the short run. But probably not the perfect solution to sustain gas demand in the long term. This alone could cap the FSRU boom.

In any case, a rush for speculative FSRU conversions will be good news for Singapore's Keppel and Sembcorp. At around $75m, conversions remain much cheaper than newbuilds.

Sveinung Stõhle, chief executive of Oslo-listed Hîegh, is so bullish on the sector that he is willing to always have an uncommitted FSRU available on short notice, should an opportunity comes along.

At a price tag of $300m or more per newbuilding, only the most financially-sound players can take such risk. Despite new entrants coming into the FSRU sector, and the risk of extensive delays or even outright cancellations of developing liquefied natural gas import projects, he remains unfettered of the sector's prospects and for a good reason. The ability of FSRUs to be deployed worldwide and offer storage and regasification services in new markets makes them indispensable for an industry flush with LNG.

Demand for floating storage and regasification units is booming amid rapid expansion of global liquefied natural gas trades. With LNG prices expected to remain competitive due to rising exports from Australia and the US, many emerging economies are opting for the quicker, cheaper floating solutions to import gas compared with conventional onshore facilities.

We have observed 20 FSRUs operating as terminals and four trading as LNG tankers. Another nine under construction will be delivered from now till 2020. More conversion and newbuilding orders are expected to be placed to meet the rising demand. 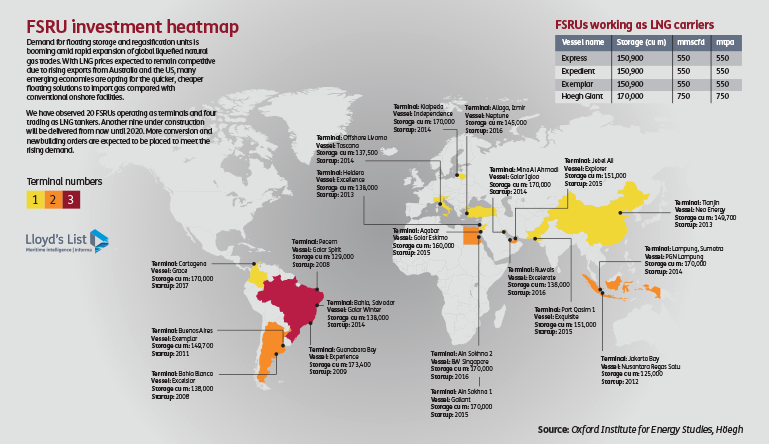 The unravelling of the North American Free Trade Agreement could fundamentally reshape trade relations between the US and Mexico, potentially creating new seaborne agricultural and energy trades.

As a presidential candidate, Donald Trump criticised Nafta for job losses, calling it a "catastrophe" and pledged to revise the 23-year-old pact, wall off the Mexican border and possibly slap tariffs on Mexican imports.

This has left Mexico - as well as third signatory Canada - grappling with an entirely new set of circumstances.

Mr Trump has since walked back those comments, with a proposal to renegotiate the deal. However, agricultural trade could end up being a victim.
For the dry bulk market, this could be the swing factor, as the renegotiation is going to translate into new demand for imports that sustain shipping.

Nafta boosted agricultural trade between Mexico and the US by eliminating all tariffs and quotas governing bilateral trade.

The US subsequently became the top global exporter of corn, wheat and rice, as well as being a dominant supplier of these grains to the Mexican market.
The free trade experiment also allowed Mexico to nearly double its combined imports of coarse grains, which, according to the US Department of Agriculture, improved from 7.8m tonnes in 2006 to around 16.2m tonnes in 2016.

While many uncertainties remain over the outcome of Nafta renegotiations, which started in mid-August, should the US create more trade barriers with Mexico, the country is sure to search for new agricultural trade opportunities across the globe.

According to Cargill chairman and CEO Dave MacLennan, the dissolution of Nafta, without any replacement, would result in a 10% haircut to company revenue, which totalled around $110bn in the most recent fiscal year. Speaking to online news service Axios last week, he said he was over unclear whether President Trump's rhetoric on the subject is a negotiating tactic or a legitimate threat.

Spot rates for very large gas carriers have held on to recent gains as propane shipments to Asia remained robust. US propane terminals have caught up with their loading programme, which was delayed in the aftermath of Hurricane Harvey, and VLGC traffic has returned to normal, accounting for the marginal easing in spot rates.

While US propane production is again picking up, US propane inventories fell for the first time last week following 22 consecutive weeks of building up. The rebuilding of propane stocks should allow US propane prices to come down, reopen product arbitrage, and increase US exports again.

Product carriers' freight earnings in Asian and Middle Eastern markets have stayed on an upward trajectory in the past week, supported by reduced vessel supply after a large number of shipments to Europe and the Americas.

While the impact of Hurricane Harvey is dissipating, the general tonnage situation for long range and medium range tankers remain tight in the East-of-Suez markets, with many vessels still in long-haul voyages, according to market participants.

When Harvey earlier created huge disruptions to product supply from the US Gulf, the east coasts of the US and Mexico were forced to import large quantities of oil products from Europe. The development has resulted in stock drawdowns in northwest Europe, which in turn started to pull in cargoes from the Middle East and Asia on LR vessels.

Box carriers' failure in implementing spot market freight rate increases on the east-west majors in September shows no let-up, with the latest market indices making for yet more dire reading. The latest Shanghai Containerised Freight Index suggests that last week's price gains on the transpacific will soon be wiped out, while Asia-Europe rates are expected to maintain their downward trajectory.

Sentiment improved last week among transpacific carriers after they had achieved at least some success with their mid-month general rate increases, following failed attempts to raise rates at the start of September, when GRIs fell flat.

US targets shipping in tightened sanctions against North Korea

More stringent measures against North Korea announced last week by the US will tighten scrutiny of shipping operations. New sanctions restrict companies and individuals from being involved with the construction, energy, financial services, fishing, information technology, manufacturing, medical, mining textiles or transportation industries in North Korea. They are also prohibited from owning, controlling or operating any ports in North Korea, be it sea ports, airports or land ports of entry, and cannot engage in significant import and export of goods to North Korea.

South Korea's Polaris Shipping has confirmed to Lloyd's List that it is finalising orders for about 10 very large ore carriers from Hyundai Heavy Industries, with the contract expected to be signed within the month. The order comes amid a fierce price war being fought by Chinese and South Korean yards.

South Korean shipbuilder Samsung Heavy Industries has confirmed it is talking to Mediterranean Shipping Co to build six of the 11 ultra large containerships ordered last week. Samsung's compatriot Daewoo Shipbuilding & Marine Engineering had already announced that it had received an order to build five of the containerships worth Won926.6bn ($818m).

The developments in South Korea come as CMA CGM on Wednesday signed a contract for six vessels of the same size, with options for another three, at two Chinese yards owned by state giant China State Shipbuilding Corp. That deal is said to be worth between $1.2bn and $1.4bn, depending on the final engine specifications.

A coalition of 30 European transportation associations including port authorities have come together to appeal to the European Union for more infrastructure funding.

The group, which includes the European Sea Ports Organisation and the Federation of European Port Operators and Private Terminals, are lobbying for continued funding for the so-called Connecting Europe Facility, established by the EU to develop a trans-European transport network that comprises sea ports, airports and roads.

The core network aims to link up 83 major European ports with rail and road, while the comprehensive network that will feed into it is scheduled for completion by 2050.

The Port of Rotterdam is backing a new project to develop practical applications from blockchain technology. The BlockLab project, which operates in conjunction with private sector partners and the city's municipal government, will investigate various potential applications of the technology including more efficient arrangement of cargo flows in logistics chains and stock financing in the port logistics sector.

The port authority has also announced international common standards for port data to enhance maritime safety and lower margins. Common standards aim to get vessels in and out of port more efficiently, reducing both costs and pollution. Preliminary calculations from Rotterdam point to a potential $80,000 in extra revenue and roughly 240 tonnes of savings in carbon dioxide emissions per call at ports.