Update: A new analysis showing the contribution of shipping, ports and other related businesses to the UK economy forecasts sluggish growth over the next few years because of Brexit, but Maritime UK chairman David Dingle says Britain could thrive outside the EU

The 41-page report, released during a Parliamentary reception, was commissioned by Maritime UK on behalf of 15 industry associations and organisations.

That is the central conclusion of a new study produced for the lobby group Maritime UK, and comes at a time when government ministers have been working hard to reassure the business leaders that there are plenty of opportunities outside the European Union.

Nevertheless, the report on the contribution of shipping, ports, ship and boat building, professional services, maritime training, and related maritime activities to the UK economy spells out the risks to the industry of leaving the EU.

More immediately, the lack of clarity on government policy during the Brexit negotiations is another concern overshadowing an otherwise vibrant sector of the economy, the Centre for Economics and Business Research says in the analysis that was published on Wednesday in the middle of London International Shipping Week.

Maritime UK chairman David Dingle was far more upbeat about prospects, however, saying the UK 's maritime industries could thrive outside the EU.

Nevertheless, because of the many unknowns associated with the UK’s withdrawal from the EU, the Cebr says it expects the sector “to experience sluggish growth over the next five years”, with industry turnover and gross value added to remain flat until 2019. After that, a slow recovery is forecast, such that by 2022, GVA and turnover are predicted to be around 15% and 13% higher respectively than in 2015. However, that is a nominal number, with much more modest growth of nearer 3% to 5% when allowing for inflation.

The 41-page report, released during a Parliamentary reception, was commissioned by Maritime UK on behalf of 15 industry associations and organisations including the Baltic Exchange, UK Chamber of Shipping, UK Major Ports Group, and Maritime London, in order to quantify the true size of the sector and its importance in terms of scale, jobs, exports, tax revenues and other metrics.

The ability to provide hard facts and figures has helped the industry gain the ear of government in recent years, but right now it is seen as more important than ever to have access to policymakers during negotiations with Brussels over the terms of Britain’s departure from the EU. A meeting between government ministers and key industry figures at Downing Street on Monday is seen as a step in the right direction. Even so, there is serious concern about the harm that would be done to the UK economy if the country left the EU without a satisfactory trade deal in place.

There are already calls for a lengthy transition period, while the maritime industry is being urged to work closely with other transport modes when lobbying Westminster or Brussels.

Brexit now threatens to damage an industry that had been doing well, although the report acknowledges that there could be considerable upside potential as well as downside risks, given that so little is known at the moment about exit terms. Because of that, the Cebr says its forecasts may have to be adjusted, in either direction, as more clarity emerges.

The study shows that the maritime sector makes a substantial contribution to the UK economy, with business turnover estimated at around £40bn, and the number of jobs put at 185,700, up from 179,000 five years earlier. 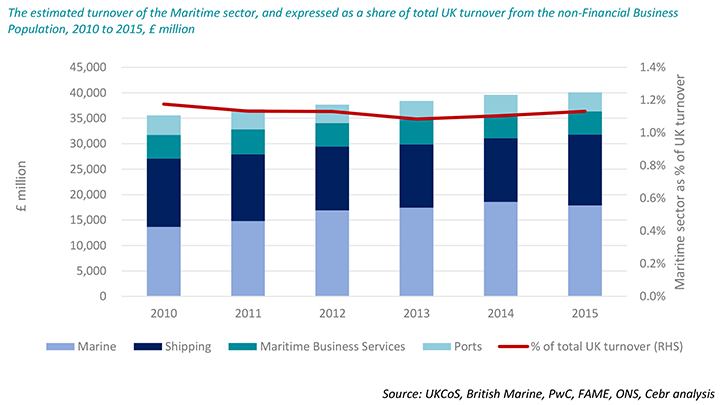 In 2015, the latest year of analysis, the sector also exceeded aerospace, which had turnover of £31bn in 2015, and defence with £24bn, although it lagged behind motor manufacturing. 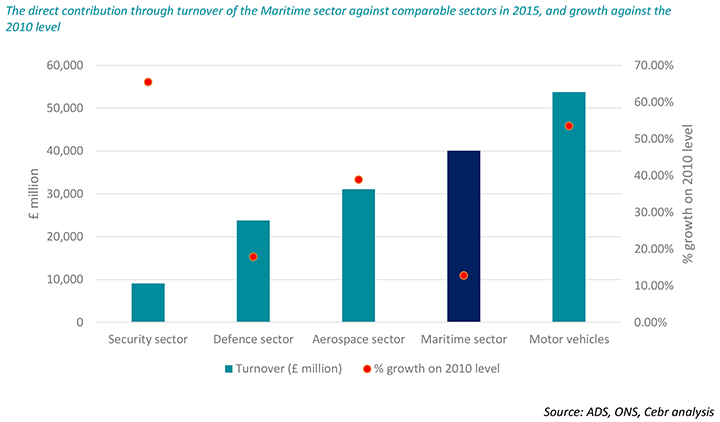 The Cebr says that the maritime sector raises billions of pounds each year for the Exchequer, with tax revenues of almost £4.7bn, or 0.7% of the UK total, in 2015. Exports associated with the maritime cluster were estimated at £12bn of goods and services in the same year, or around 2.3% of the total. This figure has fallen from more than £15bn in 2010,  or 3.4%, the decline largely reflecting a drop in the export of shipping services. 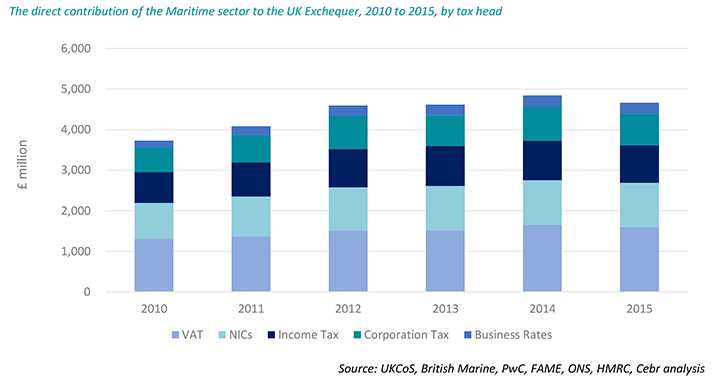 The Brexit negotiations and eventual deal affect the UK’s “heavily trade-exposed” maritime sector in many ways, the report states. Both the slowing UK economy and weakness of sterling will have an impact. So will the final decision on whether the UK stays in the customs union, and restrictions on the free movement of people.

The report also shows that Britain’s maritime industries make good money. For each £1 turnover, an estimated 23 pence was generated in gross profit in 2015. Of the various activities, shipping was the most profitable with a 31% return, followed by ports at 26% and the marine sector at just under 17%.

There may be uncertainties ahead, he acknowledged, but with a fair wind, “we can weather any storm on the way”.

Mr Dingle, who is also chairman of Carnival UK, said the industry “had a crucial role to play in transforming Britain into a thriving, outward-looking trade hub in the post-Brexit world.”

To do that, though, “we must modernise Britain’s domestic infrastructure, lead in innovation, and position ourselves as an attractive investment prospect”.

But the industry needs to think more strategically, Mr Dingle continued. He called for the creation of a national maritime research centre that would enable industry to take full advantage of Britain’s  capacity for innovative thinking.

Also, if the UK is to leave the single market and customs union, “then the deal Britain secures must be as favourable as what we currently have”. 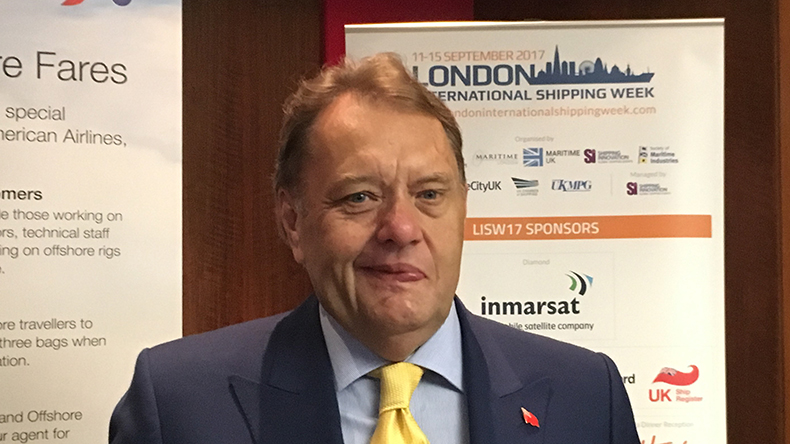 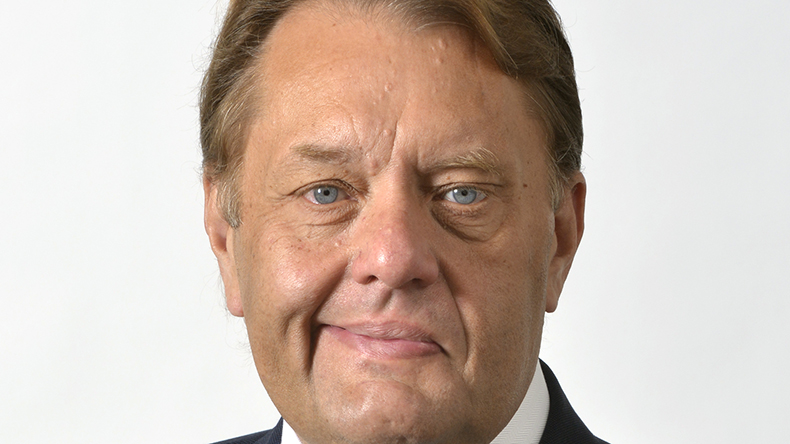 UK promises to do “whatever necessary” to attract international shipowners 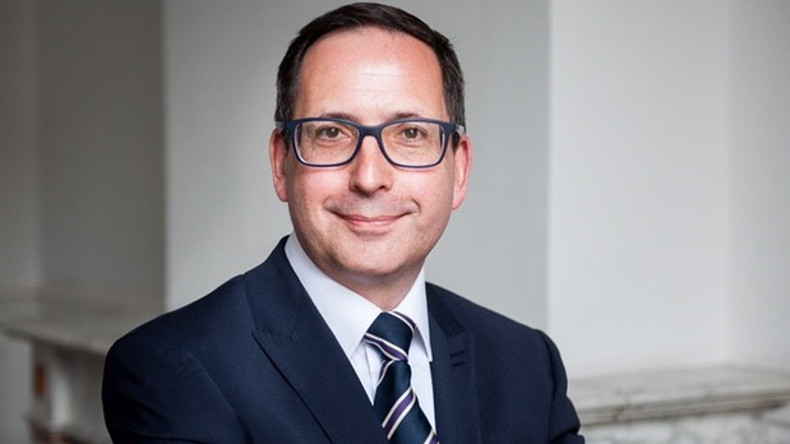