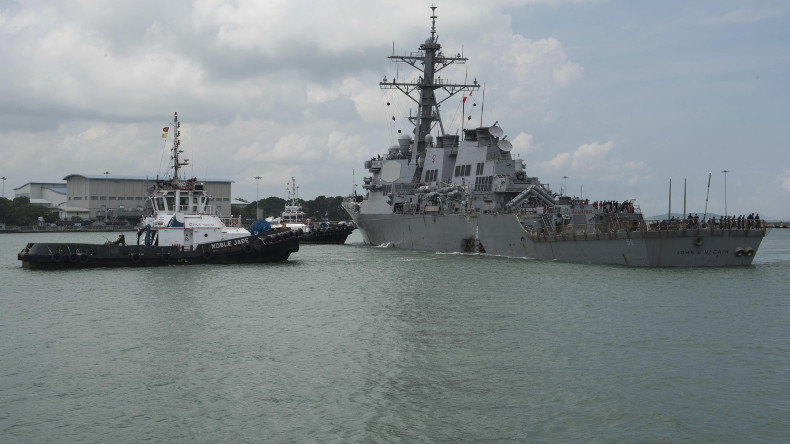 FOLLOWING the collision involving the USS John McCain and the Liberian-flagged Alnic MC tanker off Singapore on Monday, state-run newspaper China Daily has claimed that the US Navy is becoming an increasing risk to commercial shipping in Asia.

The shoe now appears to be on the other foot. Until now, China has come under fire for raising tensions which could affect shipping. Its territorial claims in the mineral and fishing-rich South China Sea have been disputed by Southeast Asian countries such as Vietnam, the Philippines, Malaysia and Brunei.

Ironically, it was the heightened potential for tension in these waters — through which an estimated $5trn worth of goods passes annually — that initially prompted the US naval patrols to ensure freedom of navigation operations.

The collision involving the destroyer USS John S McCain with an oil tanker near the Malacca Strait just before daybreak on Monday was the second in as many months. It follows the collision of the USS Fitzgerald with a boxship near Japan in June.

Some of the factors that could have played a part in these collisions include busy waterways and the fact that the incidents happened pre-dawn – when most of the crew may have been sleeping or less alert, or when a change of the shift might occur. Also, visibility at that time is lower than during the day.

Naval vessels frequently turn off their automatic identification systems, or AIS, to avoid detection. AIS helps ships avoid collisions by identifying nearby vessels. The Maritime and Port Authority of Singapore only detected the presence of the tanker prior to the incident.

The USS John S McCain collision formed an appropriate, if sombre, backdrop to the start of Safety at Sea week in Singapore, and highlighted the seriousness of the need for increased safety measures for all shipping ­ — not just for commercial vessels.

At the conference, speakers urged all parties to pay more attention to the safe operation of the more than four million vessels worldwide that are not covered by International Maritime Organization regulations. The conference also saw the Oil Companies International Marine Forum and Intertanko launching a joint safety initiative, and there were sessions on safety at ports, passenger ship safety and bunkering.

The US Navy has started a review of its operations following the recent incidents, but joint safety initiatives — especially near busy ports — are vital.

The need for stealth by military ships is understandable in times of conflict but in peacetime, perhaps these vessels which operate in extremely busy commercial waterways and ports (and not just those belonging to the US) could switch on their AIS so that commercial shipping can steer clear.

If the vessels are not aware of each other, in spite of switching AIS on, the relevant port authority — with its vessel tracking system — should act as an additional safety net and alert the ships concerned.

A stronger sense of safety in these waters would boost shipping confidence and possibly drive volumes even higher. This would definitely help the revenues of those firms operating in the maritime sector.

US warship collides with oil tanker near Singapore

In the same bit of sea