Will Singapore weather the offshore storm? 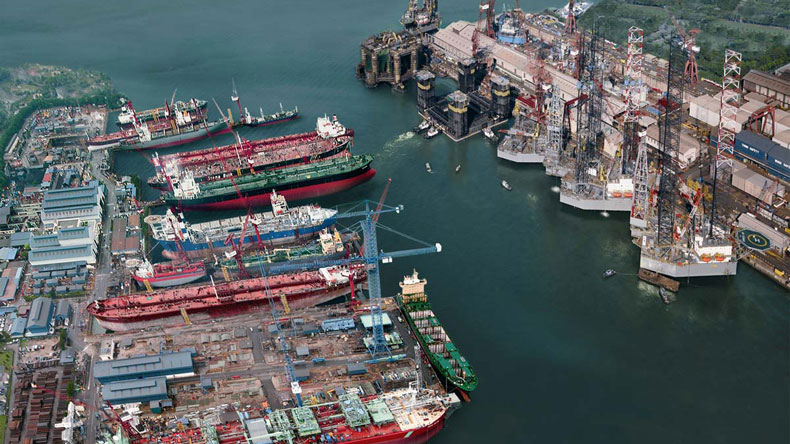 Source: Keppel Corp There is speculation over Singapore shipyard mergers, including Keppel and Sembcorp Marine

VICTIMS of the slump in oil prices are spread throughout the world and Singapore’s offshore oil and gas industry is no exception.

The city-state has, in particular, been at the forefront of offshore rig construction projects for decades with its shipyards having carved out a significant market share in the jack-up sector. However, the exposure is not just limited to offshore shipbuilding, with a number of Singapore companies active as drilling services providers (especially in the provision of offshore support vessels) and with the city-state itself well established as a leading oil trading and refining hub.

It is therefore no great surprise that the offshore industry in Singapore has taken a real beating over the last three years following the sudden and sustained crash in the oil price since mid-June 2014. The drop in the oil price has led to a significant curtailment of exploration and production, with oil majors continuing to reduce capital expenditure. This has in turn led to a very significant reduction in newbuilding orders.

According to data published by the Association of Singapore Marine Industries, the total order book at Singapore shipyards shrank by more than half from 2015 to 2016 with new orders down from S$4.9bn ($3.6bn) in 2015 to S$820m in 2016. To put this in context, in February 2017 the Development Bank of Singapore reported that, globally, since 2015 there had been only eight orders for jack-up rigs.

In the service provider space, offshore support vessel owners continue to be plagued by the ongoing chronic oversupply of offshore vessels coupled with the continued influx of newbuildings. High-profile casualties have included Swiber Holdings, currently under judicial management in Singapore, and Ezra Holdings (Emas), which has recently filed for US Chapter 11 bankruptcy.

Quite how long these circumstances will prevail is unclear. Despite the effort to cut oil output led by the Organisation of the Petroleum Exporting Countries, the price of oil continues only to creep up, with Brent crude currently trading at or around the $50 per barrel mark. Analysts are predicting at best a flat remainder to the year with the sentiment in the industry being one of caution; this partly as a consequence of rising shale production in the US.

However, despite this gloomy picture there is room for optimism and there are reasons to conclude that Singapore can ride out the storm.

First, there is a clear commitment by the state to provide financial support to the sector, as evidenced by the government-backed financing schemes. These schemes allow local companies in distress access to working capital, thereby allowing them to finance their operations and address gaps in short- to medium-term cash flow. A recent example of such assistance is that of Pacific Radiance, which in June this year was granted S$85m in government-backed financing shortly before concluding new contracts (for ten OSVs) worth over $45m.

It is reported that other, smaller local shipyards are seeking to diversify in to non-offshore related markets.

In the current climate, identifying and acting on the opportunities that are available, allied with effective cost-cutting measures, will be the key to survival and it appears that the Singaporean shipyards are well placed to do this. There is also speculation of mergers among the shipyards (including talk of a merger between two of the biggest in Sembcorp Marine and Keppel) in order for the stronger players to consolidate their positions and use the downturn as an opportunity to rationalise and restructure their operations.

Finally, in difficult times such as this, there are always opportunities and, against the background of a supportive government, Singaporean companies can take advantage. In particular, drilling services contracts for OSVs are still being concluded and OSV providers taking delivery of well-specified and reliable newbuildings will prosper (albeit not as they did in the pre-2014 days).

Similarly, there are deals to be made out of the woes of others and OSV providers with the means to do so can acquire assets at low prices in expectation of an eventual industry upturn. Certainly, this type of consolidation appears to be already in progress, as seen in the recent acquisition of three Swiber anchor handling vessels by another Singapore-based offshore provider.

Andreas Dracoulis is a partner and disputes lawyer at Haynes and Boone CDG, LLP with extensive experience in the shipbuilding, offshore construction, and energy sectors.

Singapore tops shipping centre index, with Shanghai on the rise

Sembcorp Marine likely to be Singapore’s only big yard next decade, analyst says