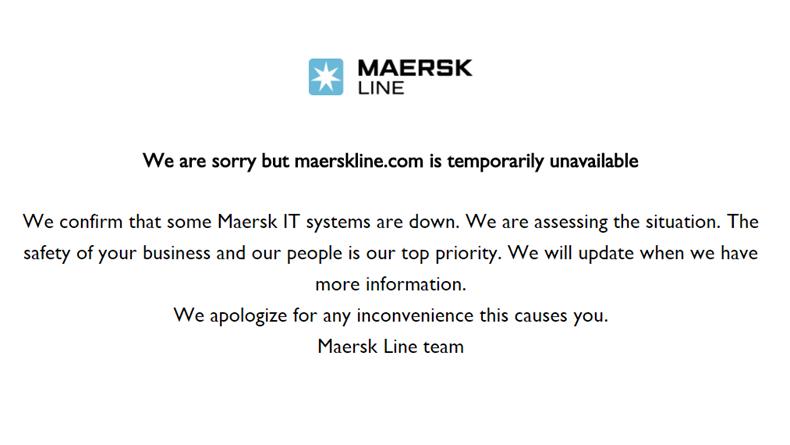 Maersk says it has contained the effects of the Petya attack.

MAERSK has contained the effects of the Petya cyber attack it suffered yesterday along with a number of other large companies around the world.

“We have contained the issue and are working on a technical recovery plan with key IT partners and global cyber security agencies,” Maersk said in a statement this morning. “We have shut down a number of systems to help contain the issue.”

All immediate vessel operations would continue as planned, making the majority of planned port calls. Access to most ports was not affected, however, some APM Terminals were affected and gates were closed.

“Cargo in transit will be offloaded as planned,” Maersk said. “Import cargo will be released to credit customers.”

The carrier said it is able to accept bookings again via the INTTRA online booking platform.

Maersk's 2M alliance partner Mediterranean Shipping Co said its systems and business operations were working normally and bookings could be placed as usual. It added that it was offering support to Maersk.

“We are working together to find other means to transmit data between the two companies,” MSC said in a statement. “This includes information such as vessel bayplans, load lists, and customs information.”

If necessary, the 2M partners were prepared to divert ships away from terminals that were not currently operating as a result of the attack, and MSC would make its 53 terminals available to 2M vessels to load and unload cargo.

“Maersk Line vessels are manoeuvrable, able to communicate and crews are safe,” Maersk said. “APM Terminals is impacted in a number of ports.”

Maersk said it would continue to “assess and manage” the situation to minimise the impact on operations, customers and partners of the attack.

“Business continuity plans are being implemented and prioritised,” Maersk said. “The aggregate impact on our business is being assessed.”

Meanwhile, Lloyd’s has warned that businesses could face a much higher bill than they expect or are prepared for after falling victim to a cyber attack.

Lloyd’s warned businesses that they needed to properly prepare or face a “hefty bill”, including ‘slow burn’ costs such as reputational damage, litigation and loss of competitive edge.

Research conducted by Lloyd’s identified ransomware — such as the WannaCry worldwide ransomware attack last month and the current Petya attack — as a rapidly increasing threat, together with distributed denial-of-service attacks fraud.

“The reputational fallout from a cyber breach is what kills modern businesses,” said Lloyd’s chief executive Inga Beale. “In a world where the threat from cyber-crime is when, not if, the idea of simply hoping it won’t happen to you, isn’t tenable.”

Ms Beale said businesses should spend time understanding what specific threats they could be exposed to and speak to experts who could help handle a breach, minimise reputational harm and arrange cyber insurance to ensure that the risks were adequately covered.

“By reacting swiftly to mitigate the impact of a cyber breach once it has occurred, companies will be able to minimise the immediate costs and their exposure to subsequent slow-burn costs,” she said.

Maersk cyber attack should serve as a timely warning to others