In the same bit of sea

It takes two ships to collide 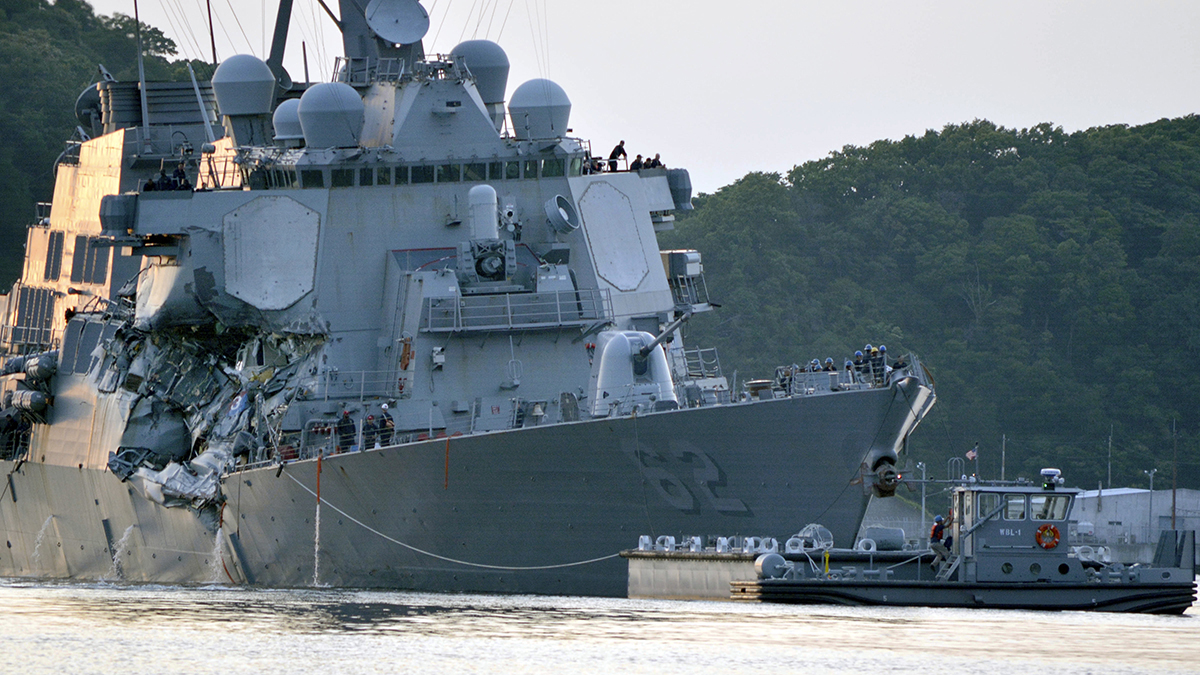 Source: US Navy via AP The cause of the collision should not be difficult to determine, assuming that both vessels had a working vessel data recorder.

AMID all the larger tragedies in recent days, the fatal collision between the US warship USS Fitzgerald and the containership ACX Crystal, 56 miles off the Japanese coast, has been widely covered in the international press.

Pictures of the damage to USS Fitzgerald indicate that the bow of the containership hit the warship almost beneath the starboard side of the bridge, substantially crushing the lightly-built superstructure. The bulbous bow also inflicted grievous damage beneath the warship’s waterline, reports indicating that more than one compartment was breached, with the pictures showing a pronounced starboard list.

There has clearly been smart damage control on board the warship to contain the flooding, although this would be practised regularly by the highly trained crew of a front-line warship. It would appear that all of the seven missing US Navy seafarers have been found dead in the severely damaged ship, with its commanding officer badly injured. Both ships made port reasonably promptly after the emergency was declared.

Reports in the immediate aftermath of the collision commented with some surprise at the contrasting sizes of the two ships, although the warship was a medium-sized vessel and the 2008-built Philippines flag containership was, at 2,858 teu, what might be described as a medium-sized vessel working Asian regional trades, on the Asia Container Express service. It was also noted that a powerful warship was probably more manoeuvrable than the larger container vessel, although the latter has a 25-knot service speed.

As with every collision involving modern vessels, the first question which is always asked will be how on earth two ships, especially one fitted with some of the most sophisticated radar equipment available, could end up sharing the same bit of sea.

The contrast between the manning on board the two vessels could not be greater. The bridge watch on the warship would have involved at least one officer of the watch supported by radar technicians, navigator, several ratings and a working operations room. At 0230, when the collision occurred, the containership, with a crew of 20, could probably count on a single officer of the watch and hopefully a lookout, on a routine passage.

And as always, even suggesting actual causation at this early stage will be premature, but should not be difficult to determine, assuming that both vessels had a working vessel data recorder, with the data actually saved and available for playback. We can only guess at the sequence of events, or the circumstances surrounding the scenario as the two ships approached one another. These are notoriously busy waters, with the commercial traffic often complicated by great fleets of fishing boats, which are not there to make for any watchkeeper’s peace of mind, and tend to wear their fishing signals even when tied up in port.

Ships collide less often than they did, before those on board had the benefit of good, reliable radar. But even the briefest analysis of contemporary collisions reveals that the causes of them have rarely been anything other than a basic failure to keep a good look-out, obey the prescribed rules for the avoidance of collision and operate at a sensible speed. Of these three, it is possible the last that is most generally ignored, in an age where precision is demanded and any excuse for not arriving on time is unwelcome.

Perhaps the need to save fuel and reduce costs in a profit-free sector has resulted in ships not operating at their maximum designed speed, but there is nothing unusual, in congested waters, to see ships blasting along at high speed. In fog in the English Channel, heavy traffic in the Singapore and Malacca Straits or the congested, fishing boat-infested eastern waters, stories of containerships rushing along at an injudicious speed are legion. Most of the time they get away with it, sometimes they come unstuck.

Deepsea pilots boarding containerships inbound for European ports are not infrequently handed a pilot card instructing them to keep the engines at full revolutions until a few miles off the Rotterdam approaches, regardless of visibility. There is also a lot of information that is entirely wrong about the “difficulties” of using the ship’s engines at anything other than slower, manoeuvring revolutions. Hence people will do almost anything rather than slow down, effectively removing one useful prescribed strategy for avoiding a close quarters situation.

But we shouldn’t, at this stage, even hint that one ship was guiltier than the other in their violent meeting. It takes two ships to collide and the rules clearly prescribe the action to be taken in the event that the “give way” ship fails in its obligations.

People say that the rules ought to be simplified so that both ships, in all circumstances, are required to take action and the “stand on” vessel no longer has this obligation until its own action becomes inevitable. But that, as previous debates on this subject have shown, opens up a whole extra dimension for fierce professional argument and we shouldn’t go there. It will take a bit of time, but the causes of this sad collision will be identified.

Philippine flagged boxship collides with US warship off Japan

Passing down the knowledge