War in Korea: a cause for shipbuilding frustration?

As tensions rise on the Korean peninsula, what impact might any conflict have on commercial shipbuilding? 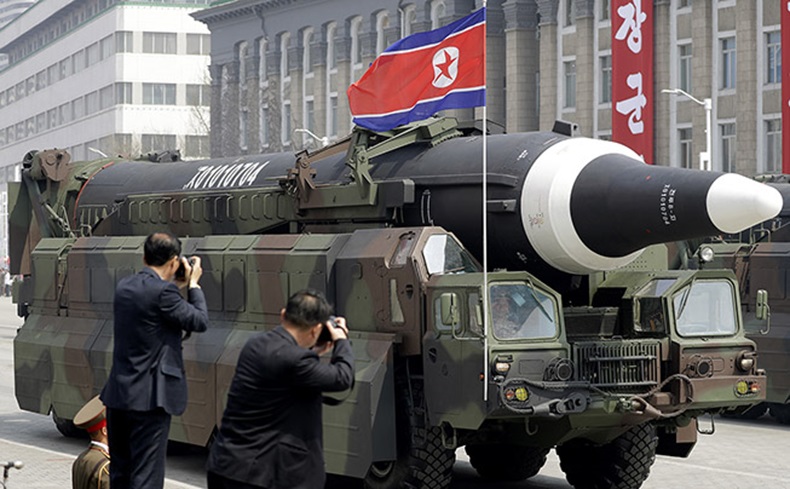 GLOBAL headlines are currently dominated by news of a substantial escalation in tension on the Korean peninsula.

The US Government has warned that all options, including a pre-emptive military strike, are on the table to prevent North Korea from developing an intercontinental nuclear missile capability.

President Trump has directed a US Navy group to the area and has said a “major, major conflict” with North Korea is possible.

The other major military power directly involved, China, has said publicly the situation could “escalate or slip out of control”.

A war between the two Koreas would have a devastating effect on the whole peninsula — indeed, for northern Asia generally. In economic terms, it would generate very serious consequences for South Korea’s ailing shipbuilding sector, already in crisis and facing significant financial challenges.

But the risk of military conflict is of grave concern to the global maritime community as a whole. South Korea’s shipyards currently build approximately one-quarter of the world’s newbuilding tonnage and the level of global investment made in vessels under construction in Korea represents a substantial financial exposure for the shipowning and ship financing sectors.

The legal issues raised by a possible war in Korea have, however, been little discussed. These are essentially issues of English law because the overwhelming proportion of South Korean export newbuildings are constructed under shipbuilding contracts and secured by refund guarantees, which are expressly governed by English law. These agreements also typically provide for arbitration or High Court jurisdiction in London.

From the perspective of the newbuilding purchaser and its bankers, there are a number of issues to consider.

Firstly, a war in Korea could lead to significant disruption to the newbuilding programme of local shipyards and to substantial delays in delivery of ships under design or construction.

Although under most Asian shipbuilding contracts, the shipbuilder agrees, after a short “grace period”, to pay the purchaser daily liquidated damages for delay in delivery, this principle is subject to agreed force majeure exceptions, including war and other “hostilities”, for which the shipbuilder is not responsible; the shipbuilder is entitled to claim an extension of time to the extent that its performance of the contract has been affected by such events.

Such provisions therefore effectively cast upon the purchaser most of the risk of delay in delivery caused by war. While this principle is mitigated by terms entitling the purchaser to terminate the contract in its entirety if force majeure events, including war, exceed an agreed aggregate number of days, this may in practice be of limited value to the purchaser.

This is in particular likely to be so if the purchaser has existing charter commitments for the vessel, which effectively prevent it from terminating the shipbuilding contract.

The second principal concern is that of physical damage, or even total loss, of the newbuilding caused by war.

Although the major shipyards are located in the extreme south of the peninsula, North Korea is already thought to have the capability to strike all parts of South Korea with both nuclear and conventional weapons.

The vessel purchaser is, however, partially protected in contractual terms against this circumstance. If the newbuilding is the subject of partial loss or damage during the course of construction, the shipbuilder is normally obliged to repair the vessel, although the shipbuilder will normally be entitled to claim a force majeure extension of time if the damage has been caused by war.

Where the vessel suffers a total loss, the contract is likely to provide that the shipbuilder must repay to the purchaser any pre-delivery instalments of the contract price, usually with interest thereon, following which both parties will be discharged from all further obligations.

From the risk perspective of the purchaser and its financiers, the key issue in this context will be whether the shipbuilder's obligation to repay such instalments upon a total loss is secured by the relevant refund guarantee.

This will obviously depend upon the precise wording of the contract and the guarantee itself, but many such guarantees given for Korean shipbuilding projects respond only to the purchaser’s termination, for delay in delivery or shortfalls in the vessel’s principal performance criteria, such as speed, rather than a total loss.

In such a situation, the purchaser and its financiers are obviously exposed to the risk of the shipbuilder’s default in making the required repayment.

The third area of risk is that, even if the vessel is not damaged or destroyed, a substantial war — particularly with a nuclear dimension — may render the shipbuilder’s further performance of the contract impossible.

A war might, for example, lead to critical shortages of materials such as steel, or of labour, or a governmental moratorium on commercial shipbuilding while hostilities continue; this certainly occurred in relation to both the First and Second World Wars.

The principal concern in this context is the potential effect on shipbuilding contracts and refund guarantees of the English doctrine of “frustration”.

This doctrine applies where a supervening event occurring after signature, which has not been expressly provided for in the agreement, renders further performance of the contract impossible or illegal, or radically changes the nature of the parties’ rights and obligations such that it would be unjust to hold them to their original bargain.

Where a “frustrating” event occurs, the contract is automatically discharged and both parties are excused from further performance. However, the doctrine will not apply where the contract itself makes provision for the circumstances that might otherwise frustrate it — if one of the parties has expressly or implicitly accepted the risks of the alleged frustrating event, neither party will be discharged from performance.

The doctrine is also excluded where the alleged frustrating event was foreseeable or was caused, partly or otherwise, by the party seeking to rely on it (see, as the most recent affirmation of these principles, Armchair Answercall Ltd v People in Mind Limited [2016] EWCA Civ 1039).

If war in Korea prevented performance of an English law shipbuilding contract, the question would arise whether the contract made sufficient provision for its consequences to exclude the doctrine of frustration.

This is, as yet, undecided in English law but the better view is that the frustration doctrine does not apply because the parties have explicitly provided for certain consequences of “war”, and should therefore be taken to have agreed to exclude its other consequences, including the possibility of frustration.

If, however, this view is wrong, and Korean shipbuilding contracts governed by English law are capable of frustration by reason of a catastrophic war preventing performance, many owners and their financiers are at great risk.

Although The Law Reform (Frustrated Contracts) Act 1943 permits in certain circumstances the recovery of monies paid under a frustrated contract, such a claim is far from straightforward and the shipbuilder’s liability is clearly not secured by the customary form of Korean bank refund guarantee.

Certain of the risks referred to above may be mitigated by war and political risks insurances and, in the case of new projects, by tighter wording in the relevant shipbuilding contract and refund guarantee.

There is no doubt that newbuilding purchasers and their financiers should re-evaluate the risks — and their specific responses to the same — in light of the deteriorating situation in Korea.

Simon Curtis is the author of “The Law of Shipbuilding Contracts”, published by Informa; he is the senior partner, and Phoebe Anderson an associate, of Haynes and Boone CDG, LLP, the London-based specialist shipbuilding and offshore lawyers forming part of US law firm Haynes and Boone