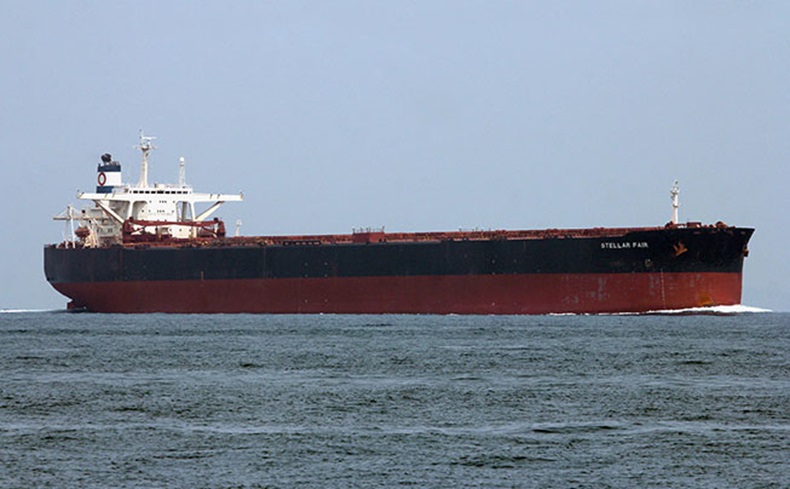 The VLCC to VLOC conversion Stellar Fair is 27 years old.

VERY large ore carriers converted from very large crude carriers need not be sent to the scrapyard yet as they are generating profits, despite their "vintage" age and safety factors, said shipping association BIMCO.

The average age of the converted VLOCs is 23.8 years compared with just 5.7 years on non-converted ore carriers above 200,000 dwt, according to BIMCO. The average demolition age for the conversions is 24.2 years.

"Still, the age itself is not the all-important explanatory factor behind a demolition decision," said BIMCO.

The dry bulk industry is paying particular attention to the converted VLOC fleet, following the loss of Polaris Shipping's 1993-built, 266,141 dwt Stellar Daisy, which reportedly spilt and sank off the coast of Uruguay in high seas in March with 24 crew on board. Only two seafarers were rescued.

Two other such vessels belonging to the company were found to have hull cracks and obtained repairs in subsequent weeks, prompting South Korea's Polaris to launch an inspection process for all its converted vessels. Brazil's Port State Control also said it would inspect the ships before the loading of iron ore at its ports following the latest incident, which saw the 1994-built, 304,850 dwt Stellar Queen anchored off Ponta da Madeira fully laden for about three weeks.

"Naturally safety is a paramount issue, but also the fact that they are still employed on a contract," said BIMCO.

Oder vessels generally do not have any finance costs attached to them, meaning their daily operating expenses are lower than the newer, more modern type of ships, allowing them to deliver a "profitable return on investment," Mr Sand said. A large number of the contracts were fixed between 2008 to 2012 for 10 years with Brazilian iron ore major Vale.

Vale could terminate those contracts early but that would incur a penalty, so the best thing for it to do would be to run the contracts till the end, said Mr Sand.

According to BIMCO, the current batch of converted VLOCs operating on the Brazil to China route can carry 56m tonnes of iron ore per year, which equates to 26% of the total iron ore trade from Brazil to China last year.

In comparison, the existing newbuilding orders for 32 valemax ships, each of 400,000 dwt, that will enter the market in 2018 and 2019 for that specific trade lane will be able to carry 51.2m tonnes per year.

"We do not expect the delivery of the valemax ships into the active fleet to be neutralised by immediate or simultaneous demolition of the converted VLOC fleet,” BIMCO concluded.