FRIDAY, February 17, 2017, was a sombre day for South Korea’s shipping industry, as a court announcement that morning sounded the death knell for Hanjin Shipping, the nation’s former flagship carrier.

The Seoul Central District Court, which was in charge of Hanjin’s rehabilitation proceedings, declared the line bankrupt after the expiry of a two-week appeal period, bringing an end to the carrier’s 40-year history.

It had been a tumultuous time for the global container shipping sector ever since Hanjin filed for court-led receivership on August 31, 2016.

With its vessels unable to make payment for services rendered at ports and as the company’s debts mounted, creditors went after Hanjin’s ships with arrest warrants in hand. Other service providers and port operators refused to allow the vessels to enter ports for fear of non-payment of fees.

These actions brought a significant portion of the global logistics chain to its knees, with billions of dollars’ worth of cargo stuck on vessels stranded at sea — a complicated mess that would only be unravelled with great difficulty over the following months.

Even worse was the plight of Hanjin crew members, who were trapped on the vessels for months on end, sustained only by supplies of food and water sent over by non-profit organisations and the company when it was able to do so.

A harbinger of Hanjin’s end came in the form of a report released by its independent auditor, Samil PricewaterhouseCoopers, in December last year. The report said it would be more economically viable to have the carrier’s assets liquidated as opposed to continuing with rehabilitation measures.

In its report presented to the court, the audit firm said Hanjin could be liquidated for roughly Won1.8trn ($1.5bn) but did not reveal the shipping line's monetary value as a going concern due to ongoing asset sales.

The court used the same reasoning as the basis of converting Hanjin’s rehabilitation proceedings into bankruptcy proceedings.

But what led to this fiasco in the first place? 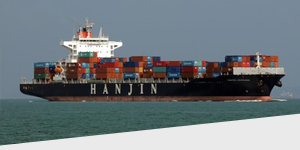 The collapse of Hanjin

The latest news, analysis and comment on Hanjin's fall into bankruptcy

Some blamed it on mismanagement on the part of the family-controlled chaebol or conglomerate, Hanjin Group, which counts Hanjin Shipping and Korean Air among its numerous subsidiaries.

Ms Choi told South Korean prosecutors during a court hearing in September 2016 that as a housewife, she had not been prepared to run Hanjin Shipping and acknowledged she was partly responsible for the carrier’s predicament.

Ms Choi, who is the chairwoman and chief executive at logistics firm Eusu Holdings, has been indicted for insider trading.

She and her two adult daughters allegedly used insider information to avoid around $1m in losses, selling about Won3bn worth of Hanjin’s shares in April.

The investigation is ongoing.

Hanjin’s fleet size had increased nearly twofold between 2009 and 2013, the time Ms Choi was Hanjin Shipping’s head, as the company sought to capture greater market share.

The expansion, though, did not yield the desired result for Hanjin, or any of the other shipping companies that did the same, as China’s economy began to slow and global trade remained tepid after the 2008-2009 global financial crisis.

By the time Ms Choi handed over the reins to her brother-in-law, Cho Yang-ho, Hanjin Group’s chairman in 2014, Hanjin was already in pretty bad shape.

There was no respite for the troubled shipping line as cut-throat competition across the globe, amid the prolonged downturn, sent rates spiralling downwards, way below breakeven levels.

In October last year, Mr Cho told a parliamentary hearing in Korea that Hanjin had lost the ‘game of chicken’ played among large shippers and the company had realised there was a limit to participating in a dumping war.

Korean Air took a stake of around 33% in Hanjin in 2014, pumping around Won2trn in liquidity into the beleaguered carrier and slashing its debt-to-equity ratio to 800% from around 1,400%.

Despite this, Mr Cho said foreign shipping lines, with substantial financial and other forms of support from their governments, had continued to flood the container industry with excess capacity, leading to depressed rates.

Separately, Hyun Jeong-eun, who served as Hyundai Merchant Marine’s chairwoman between 2003 and March 2016, also had little management experience when she took over the reins after her husband, Hyundai Group chairman Chung Mong-hun, committed suicide amid investigations into his links with a funds transfer to North Korea in 2003.

CTI Consultancy partner Andy Lane believes HMM had been heading for a similar fate but managed to avert the crisis.

“The blame for poor business performance can only ever rest at the top: chairman, board of directors, chief executive, C-level executives,” he said.

“Hanjin and HMM are very similar animals, and a combination of poor financial acumen plus a lack of focus on people and process is a lethal concoction in any industry, and not least one in a long downturn.

“Whereas they might be strong in the local Korean market, if you wish to play globally, then you need excellence in everything that you do globally [and] a highly motivated and agile global organisation — and that, I suspect, has been absent.

"For HMM at least, they have the opportunity to do this now — and, if they do it well, then they can prevail,” added Mr Lane.

“Hanjin was not alone in making the decision to expand and gain market share — the entire industry was equally guilty of reckless expansion,” he said.

"If the situation for Hanjin did not occur today and it was pushed back six months from now, I think the Korean government would have stepped in," he said shortly after Hanjin filed for court receivership.

"There is really no justification for the Koreans to step in to bail out Hyundai [Merchant Marine] a couple of months earlier, and then failing to do the same for Hanjin."

"Clearly Hanjin was the stronger of the two Korean carriers and I think they had a much better organisation, they had much better coverage and a fairly strong [information technology] systems used by other competitors."

Mr Tan noted Hanjin also had more strategically attractive assets, such as worldwide container terminal holdings. Thus it would have made more sense to save Hanjin rather than HMM.

The main reason Hanjin was not bailed out by the government was political, in light of the alleged accounting scandals plaguing shipbuilder Daewoo Shipbuilding & Marine Engineering, previously rescued by the authorities. Thus lawmakers were unwilling to put their support behind Hanjin, lest history repeat itself, he said.

Other industry experts also concurred that poor timing was a key reason for Hanjin’s downfall.

Drewry Financial Research Services director Rahul Kapoor said HMM was initially carrying a larger debt load than Hanjin but managed to finish its negotiations with charterers and carried out its debt-to-equity swap earlier than its counterpart.

“HMM had a leg-up in terms of its restructuring. Maybe that tilted the ball in the favour of HMM,” he said.

Mr Kapoor also admitted that political will or a lack thereof could have played a part in Hanjin’s demise.

With cash-strapped shipbuilder DSME receiving a significant amount of financial support from the government, the authorities may have decided the cost of saving Hanjin could be just as high compared with HMM.

Mr Kapoor said shipping and shipbuilding in Korea were in a very long, drawn-out recovery process, which will take a great deal of time as the global industry continues to remain in a slump.

“They looked at all these factors and decided they [could] cut their losses and I think that is why they decided to support HMM and not Hanjin,” he said.

A Seoul-based industry observer agreed, saying: “At the beginning of [2016], Hanjin’s situation was better than that of HMM, but HMM moved quickly and they were successful in financing Won1.2trn by selling Hyundai Securities and were successful in getting into the 2M alliance, so the situation is more favourable than Hanjin's.”

Both companies were equally risky to own at that point, he added.

A tale of two debtors

In light of the bankruptcy proceedings, it would seem Hanjin’s creditor banks will be better positioned to ride out the aftermath.

A report from Moody’s Investors Service said the banks had already made adequate provisions against their exposure to Hanjin and have capped losses without the need to extend more credit.

Other creditors, though, may not be so fortunate, with Hanjin's bondholders likely to see close to Won1.2trn in losses from Won939bn in private placements and Won250bn in public offerings, said Korean media reports.

"The carrying values for Hanjin’s assets will be markedly lower and there is a very slim chance that creditors will be able to recoup their debt without taking a steep haircut," said Drewy’s Mr Kapoor.

"Creditors will be hoping to salvage the best they can but, unfortunately, the asking values will be very hard to come by.”

Alphaliner’s Mr Tan concurred, adding: “The recovery rate is very low and most unsecured creditors are likely to get close to nothing."

Korea to give shipping a $5.6bn shot in the arm